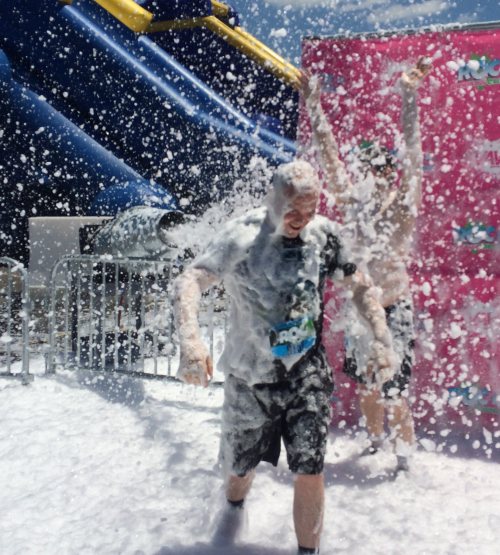 I have completed my first 5K!

wolfekko and I were in Washington DC to take on the ROC Race, which stands for Ridiculous Obstacle Challenge - and it lives up to its name.

The people in my old office used to do obstacle races quite regularly - I was never much into the idea because as well as involving a frankly suspicious amount of mud, they were always billed as tests of macho endurance involving crawling through freezing pools and under barbed wire. That's not a leisure activity - that's World War I. The ROC race is much more light-hearted than that - it's done for fun and its events are twelve inflatable obstacles of varying degrees of madness and punishment.

Once we picked up our numbers, we spent a while in the waiting area with everyone milling about waiting for their start time, where you can watch the hopeful competitors balancing on a slippery beam and having to dodge the spectacular machination of two foam wrecking balls spinning from a crane, inevitably being whacked in the face and then falling into the water below. After that, we joined a sort of queue/throng of runners where we were gradually shuffled along as our start time neared, the crowd being kept alert by a clearly cocaine-fuelled DJ. We got into the first group of runners in our wave, and were let loose upon the course, which involved this:

1. A "tightrope" underfoot suspended above a two foot drop to a bouncy castle, with another rope overhead for balance. Easy!

2. You find out here that you've been lulled into a false sense of security, because this one is a set of four humongous balls that you're meant to jump across. This is impossible. I didn't see anyone coming close to a result that could be described as making it to the first one - Susi leapt off the starting platform, landed on it and immediately slipped off. I, in my usual competitive effort to fail the most spectacularly if nothing else, jumped to the first, planted my feet on it, the rest of me kept going, I hit the second one with my face and then sort of folded in half backwards as I fell between them. I definitely stretched my arm as I rolled across it on my way down, but I found myself alive.

3. Swinging on a rope suspended between two platforms! Survived triumphantly.

4. Over a choice of small, medium and stupidly high walls. Years of jumping the six foot high cinema car park fence in Aberdeen during academy paid off here.

5. This was a flat, slippery inflatable sort of... slide/throat thing where you had to propel yourself in through a mass of foam. Here's a retrospective tip - don't open your mouth.

6. A steep ramp about ten feet high, to climb with the aid of a rope. Not actually as hard as it looked.

7. Monkey bars - much, much harder than they look. I was able to do these easily when I was five, but now I'm about 160 pounds heavier and my arms just can't support that much. After a couple of rungs, I dropped to the bouncy castle surface below, then managed to spring my way up again and was able to finish on the bars.

8. THE SWEEPER. A huge and barely believable contraption of doom, composed of thin inflatable walkways over which two foot wide spinning rods whirl around at head height. I started off bravely, then realized I was going to get hit and dove to the floor, creating an entirely new technique as I sort of fish-flopped my way to safety underneath the mighty rotating arm.

9. Moon bounce - a corridor of bouncy castle, made more challenging by the movement of the runners next to you, propelling you metres into the air at the slightest sympathetic vibration.

10. THE WRECKING BALLS. The thing that we'd seen people fling themselves into at the beginning, and it was even more intimidating up close. I chose, foolishly, to attempt the lane where we were going against the whirling balls, and managed to keep my balance as I dodged the first sweep. Then the second one came in much closer, I tried my dive technique again, hit the surface, then slipped off and fell in.

11. A water slide with the aid of a tube ring! Not physically demanding, apart from the climb at the start. You then hurtle down a ramp towards the splash pool, where I swear I skipped across the water before coming to a halt. I successfully stayed upright and began paddling myself to the exit, when Susi chose to "help" and I fell in again.

12. Finally, the bigger version of the previous obstacle - a last huge climb followed by a 45-degree slide that felt like it lasted about six million feet, followed by falling into water one more time. As you come out, you walk into the blast zone of a metallic cannon absolutely disgorging foam, and at that point, you have completed the race, gained glory and triumph and also some bruises.

After we finished, a group asked me to take a picture of them at the finish line - and so I got to photograph five soaked and foam-coated girls. And that's the greatest reward I could have asked for.
Tags: travel
Subscribe